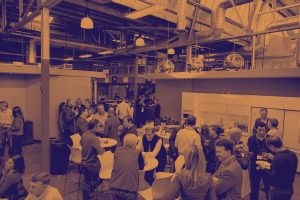 DENVER, CO (April 1, 2019) – Substance abuse, childhood mental health, care coordination, and preventable medical errors are among the 10 problems that a group of serial entrepreneurs will address over the next 10 days as part of the 1O.1O.1O Cities (Health) 2019 program.

1O.1O.1O, a project of the Colorado Nonprofit Development Center, tackles the world’s wicked problems through public education and engagement that inspires entrepreneurs to action. The 10 wicked problems for this program, and the 10 entrepreneurs who have been recruited from around the world to confront them, took center stage today at the program’s kick-off.

The goal of the program is to launch a 12-month effort to inspire the creation of new ventures aimed at solving one or more of the wicked problems in health. All of the program’s participants have had success launching past ventures and are now seeking their next big challenge.

“Wicked problems cannot be addressed by government or industry alone,” said 1O.1O.1O Founder and CEO Tom Higley. “We provide serial entrepreneurs with the inspiration and the support they need to explore opportunities for market-based solutions that can generate both return on capital as well as significant impact.

The invited prospective CEOs for this 10.10.10 Cities (Health) program, the sixth program to date, are:

In 2014 he founded BioBots, a company building 3D bioprinters that print living tissues out of human cells. Danny has spent the last year journeying through and discovering hidden secrets of planet Earth while remaining inspired by life’s role as a powerful design medium with which to create the future. Celena Green

Kenan Hopkins is an entrepreneur, coach, speaker, and author. Kenan founded Valet Gourmet, an on- demand food delivery startup, at the age of 23 with $10k in personal credit card debt. After growing to a

staff of nearly 100 with over 125 strategic restaurant partners, the company was acquired in early 2016. In 2011, Kenan joined EO, the world’s largest entrepreneur network, and in 2013, was accepted into EO’s prestigious Entrepreneurship Masters Program, a three-year course that is a joint venture between EO and MIT.

Steven is an entrepreneur, technology executive, and angel investor from Victoria, Canada.
On his last day of being an undergrad student at the University of Victoria in 1999, Steven founded Latitude Geographics, an impactful mapping/GIS software company that grew to 140 employees serving more than 1400 customers and partners around the world. Latitude Geographics was purchased by a large private equity firm in 2017, and Steven remained in the CEO role for a year following the acquisition. During a brief experiment with retirement, Steven realized that what deeply excites him is being part of building companies that matter and have the potential to make the world the better place.

Rashmi is a serial entrepreneur and venture strategist with a track record for building successful businesses from the ground up. She launched her first business at the age of 16 and followed it by founding the wearable technology startup, Evalise. She’s since dived more deeply into IoT to help define best practices in digital transformation. Rashmi has managed global teams to launch new products that have generated millions of dollars in revenue, bootstrapped two ventures of her own, advised numerous others, and has helped drive two companies to successful exits. Her writings on ‘How to Increase your EQ’ are on the reading list for courses at Stanford Business School.

Daniel Rothman co-founded his first startup, a sleep technology company Zeo, as an undergraduate studying Cognitive Neuroscience at Brown University. He invented the core technology for Zeo while completing an independent study with Professor Hazeltine. He then co-founded NightPilot with Brown Professor Hendrik Gerritsen to commercialize an astronomy toy for children. Daniel launched PeraHealth, a life-saving EMR application that identifies patient health trends and reduces mortality in hospitals by 30%, and simultaneously completed his Healthcare Executive MBA at UC Irvine. In 2012 Daniel joined CityMD, a fledgling urgent care company, supported its growth it from 4 to 75 locations, then facilitated its sale to Warburg Pincus for $600M.

Charles Sims is a real estate professional with over 10 years of experience in real estate development, construction management, project management, and project financing. He has lead development teams, and coordinated the successful completion of large, medium, and small scale projects. In addition, he has created and deployed nationwide strategies for real estate projects.

C.J. is an accomplished Colorado entrepreneur with more than 25 years of success in the telecommunications and software development industries. Companies that he has founded or co- founded include Front Range Technology Group, a telecom and software consulting firm, and Adigo, a teleconferencing services company that saw a successful exit through acquisition in 2017. C.J. has also been active in municipal politics serving a term on Centennial City Council and conducting a bid for mayor in 2017.

Blaine Warkentine, MD, MPH is a trained orthopedic surgeon. For the last 17 years he has worked throughout health, orthopedics and aging industries starting with seven years building a $100m vertical for Brainlab in orthopedics. He has been involved in five exits to Stryker, Smith and Nephew, Merck, Anytime Fitness, and HCA. He continues to see opportunities in improving health value by giving consumers better tools to be in more control of their personal health and wellness.

Marc Washington is global entrepreneur with a background in finance and engineering. He founded a food tech company spanning 75 cities in 20 countries connecting chefs to foodies throughout the Middle East, Europe, and the US. Prior to that he founded a real estate acquisition, management and consulting company, which currently owns and manages $3 million in assets. As an investor he has helped manage or acquire more than $5Bn in assets for global firms such as The Carlyle Group, Mubadala and MacFarlane Partners.

A wicked problem can be extraordinarily difficult to address. The complex adaptive systems that give rise to these problems, and the interconnected nature of these problems with other problems, have caused most entrepreneurs and investors to remain on the sidelines, at a loss about where and how to begin. For our entrepreneurs, however, wicked problems are opportunities in disguise. Participants in the Cities (Health) 2019 program will be studying wicked problems such as health literacy, social isolation in later life, chronic sleep deficiency, patient engagement, and health incentives and disincentives.

“I got access to a network of experts, research, and a volunteer team to help me deeply understand a problem,” said Spencer Hutchins, Founder and CEO of Concert Health, a company that helps physicians integrate behavioral health into their practice . “We started to assemble the team and ideas that became Concert Health. A 10.10.10 validator introduced me to my eventual co-founder and away we went.”

1O.1O.1O, a project of the Colorado Nonprofit Development Center, is on a mission to tackle the world’s wicked problems through public education and engagement that inspires entrepreneurs to action. 1O.1O.1O is: ● 10 Wicked Problems ● 10 Prospective CEOs (from all over the United States) ● 10 days spent together exploring market-based solutions. During the 10 days, prospective CEOs connect with each other, with 20+ Validators (primarily large organizations and institutions that understand the wicked problem area and the market need) and with 20-30 Ninjas, highly skilled individuals who provide the CEOs with an ad-hoc start-up team. Since launching in 2015, 1O.1O.1O has inspired eight new ventures.